Bhutan has been called by many names over the centuries

A brief about travel to Bhutan:

The Kingdom of Bhutan (also known as Bhutan) is a landlocked country located at the eastern end of the Himalayas in South East Asia. It is bordered to the north by China and to the rest by India. Bhutan is regarded as the last “Shangri-La” on earth. Because of its remoteness and isolation in the Himalayas, its spectacular mountain terrains, breathtaking and meandering hills and valleys of incredible natural beauty, fresh air, varied flora and fauna, unique and age-old tradition and culture, and friendly and warm people are the major attractions that draw travelers seeking adventures, experiences, touring, trekking, hiking and holidays. Travelers to Bhutan describe it as the “exotic and mystical” realm while they experience and witness for themselves why it’s also called the “The Land of the Thunder Dragon.”
Bhutan opened our door to tourism only in 1974 and right from the start Bhutan regulated the flow of tourist to the country by introducing high tariff in order to preserve its rich cultural heritage, unique national identity and pristine environment. Through its restricted tourism policy, Bhutan has emerged as one of the few unexplored tourist destinations and least traveled countries in the world. 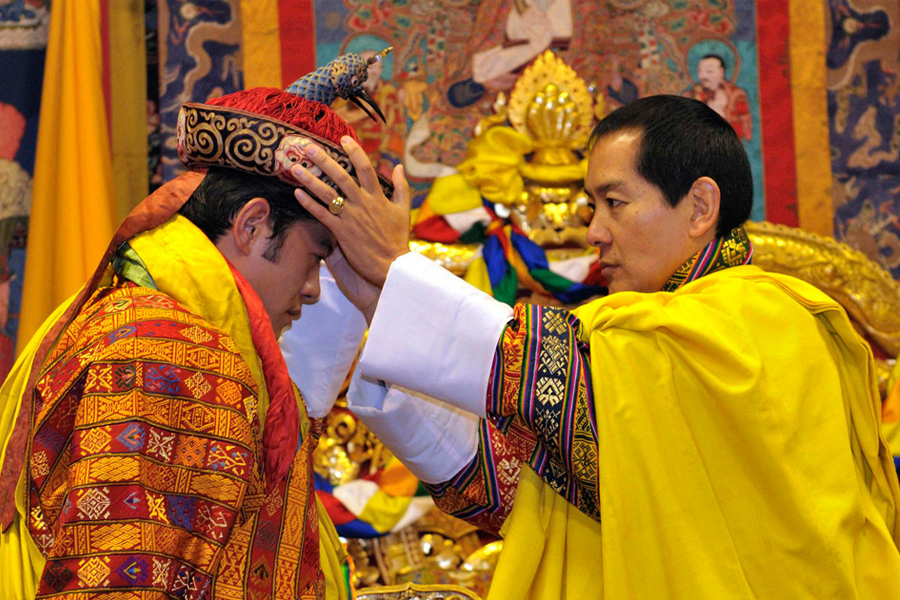 Trongsa Penlop Ugyen Wangchuck who controlled the eastern and central region, overcame a decisive victory over his fiercest opponents and united the nation in the beginning of the 20th century. In 1907, a historic assembly of representatives of the monastic body, civil servants and the people unanimously elected Gongsar Ugyen Wangchuck as the first hereditary King of Bhutan. That ended the dual system of government established by Zhabdrung Ngawang Namgyel. The First King Ugyen Wangchuck reigned till 1926, and was succeeded by his son, King Jigme Wangchuck, who ruled the kingdom till 1952. Those reigns were brought political stability and economic prosperity. The third King, Jigme Dorji Wangchuck (1925-1972) is considered the Father of modern Bhutan as he introduced the process of modernization and opened the country to the outside world by launching the planned development program in 1961 that brought dramatic changes to people and country. He also set kingdom’s footprint on the globe by making Bhutan a member of the United Nations. He also entered Bhutan into several international organizations. After his death in 1972, his son, the fourth King Jigme Singye Wangchuck, ascended the throne in 1974 at the age of 17 becoming the youngest monarch in the world. With strong emphasis on the well-being, the dynamic monarch dedicated himself to the policy of socio-economic development for the country without losing its ancestral traditions and cultural heritage. The 5th and the current reigning King (Druk Gyalpo) also known as the “People’s King” is Jigme Khesar Namgyel Wangchuck (pictured on the right). He became King on 9 December 2006. A public coronation ceremony was held on 1 November 2008, an auspicious year that marked 100 years of monarchy in Bhutan.

The Government of Bhutan is a constitutional monarchy. The peaceful march to democracy has been a steady one initiated by the fourth King of Bhutan. The King of Bhutan is head of state. Executive power is exercised by the Lhengye Zhungtshog, or council of ministers, headed by the Prime Minister. Legislative power is vested in the bicameral Parliament, both the upper National Council and the lower National Assembly. In 2008, Bhutan adopted its first modern Constitution, codifying the institutions of government and the legal framework for a democratic multi-party system. 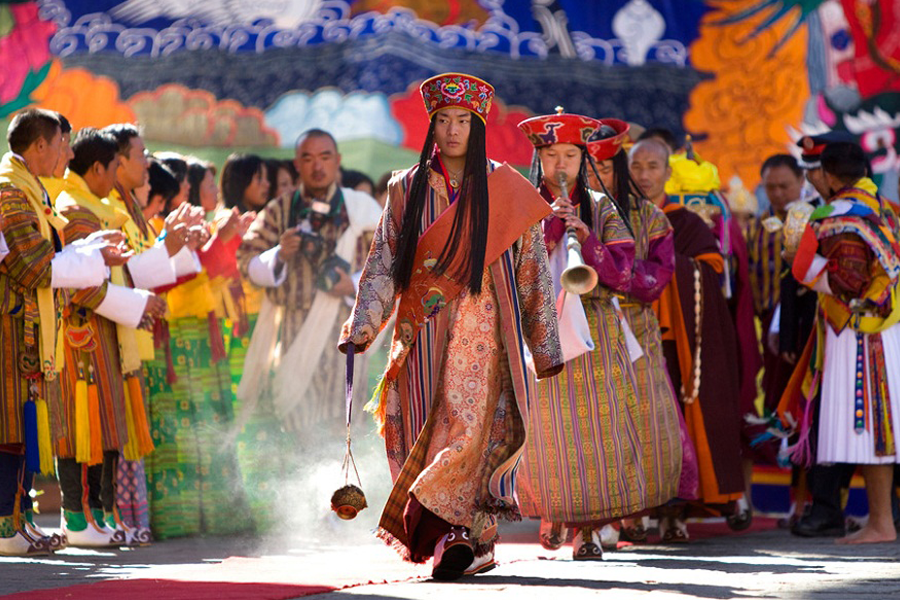 Bhutan has managed to presence a rich tradition and culture. Bhutanese language and literature, the arts and crafts, dance, music, drama, ceremonies and festivals, architecture and the basic social and cultural values have their significant roots in the Buddhism. Dance, music, song and drama are an integral part of religious ceremonies and festivals, and play a significant role in the lives of the people as they offer opportunities to become immersed in the meaning of the religion and accumulate merits. The festivals celebrate the faith, legends, myths and history of Bhutan and are important religious and social gatherings.

Bhutan has relied on its geographic isolation to protect itself from outside cultural influences and has long maintained a policy of strict isolationism, both culturally and economically, with the goal of preserving its cultural heritage and independence. Only in the last decades of the 20th century were foreigners and tourists allowed to visit the country, and only then in limited numbers. In this way, Bhutan has successfully preserved many aspects of a culture, which dates directly back to the mid-17th century.

The country has diverse ecological zones; sub-tropical, temperate and alpine. About 72.5 percent of the total land is under forest cover and it is home to about 7,000 species of plants, 165 species of mammals and 700 species of birds. About 26.23 percent of the country lies under protected areas, excluding 9 percent biological corridors created to connect different protected parks. Around 35 percent of the country’s total area is under some form of conservation. Bhutan falls under the top ten countries with the highest species density in the world, and has the highest percent of land area under protected areas and forest cover in Asia. Bhutan has been declared as one of the ten global biodiversity ‘hotspots’ for its huge bio diversity. Unlike other Himalayan regions, Bhutan is successfully conserving and preserving its rich bio diversity. Bhutanese people have preserved their natural environment for centuries; they have always lived in harmony with nature and this relationship has been forced within moral, cultural and ecological borders. Buddhism plays a central role in people’s lives and culture. The basic principle is to give back to nature what has been taken away, and accord respect to all forms of life. Buddhism teaches interdependence among all life forms. This has established a close and harmonious relationship with the surrounding environment.

The arts and architectures reveal pure essence of beauty and hold a symbolic meaning and interpretation. The paintings are the most visible manifestation amongst the varied Bhutanese arts today. The exquisite traditional painting depicts the spiritual depth and important aspects of Bhutanese culture. Bhutanese art does not exist for its own sake. More important than their esthetic quality, which is valued though antithetical to Buddhist values of non-attachment, paintings of Bodhisattvas and the like exist for instructional purposes. Art is mostly a religious obligation, the anonymous creators of such works blend indigenous and Tibetan Buddhist traditions. These highly decorative and ornamental paintings are most often seen in dzongs, monasteries, lhakhangs, and household shrines.

The Dzongs (Fortresses) have the striking architectural features reflecting artistic beauty and unmatched engineering skills. The solidity and elegance of the sloping walls, detailed woodwork and the pattern of rich color adorned on the windows, doors, beams and walls in traditional splendor are the most visible exotic aspects of the Dzongs in the Kingdom.

The economy of Bhutan is based on the agriculture and forestry, which provides the main livelihood for more than 60% of population. Agriculture consists largely of subsistence farming and animal husbandry. The economy is closely aligned with India’s through strong bilateral trade and monetary links and dependence on India’s financial assistance. Hydropower generation and export especially to India forms the major revenue source for the country.